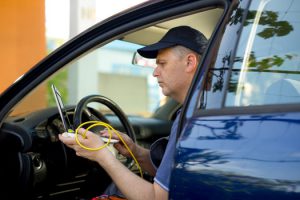 Shopping for a used vehicle can be a difficult process, filled with uncertainty about whether you’ve made the best decision on a purchase. It is important to inform yourself on what to look out for as far as issues you might encounter while looking at and test driving a vehicle. To alleviate some of the stress deciding on whether to make a purchase or not, here is a list of 7 issues you are likely to come across when having a car inspection performed on a used vehicle.

The gearbox is one of the most expensive systems in a vehicle to have work done on, so it’s important to be aware of common problems.

Issues with the clutch are especially common in areas where a lot of city driving is done.

Issues with a vehicle’s brakes are common, and it’s important they are addressed as soon as possible to prevent a possible safety concern.

Though issues with the electrical system in a vehicle are fairly common, they can be quite difficult to pinpoint.

Rust often occurs in older vehicles. When left untreated, it can cause a lot of damage. If you live in an area where the roads are salted in the winter, the risk of rust damage doubles.

Fluid leaks are a common occurrence with used vehicles. There are many fluids running through the different systems of a vehicle, and it’s important to identify the source of a leak to get an idea of the seriousness of the issue.

If you’ve already ruled out the battery as the cause of an electrical issue, the alternator is the likely culprit. On most newer vehicles there is an indicator light that will let you know if there is an issue with the alternator.

If you are interested in a used vehicle and need an auto inspection before buying it, get in touch with the used vehicle inspection experts at Lemon Squad. We have the best turnaround time in the industry and can send an inspector to you. Call 1-888-231-7965 today.